Australia is a Monarchy which is a form of government in which a hereditary king or queen serves as the nation’s sovereign. Australia is governed under a form of constitutional monarchy, largely modelled on the Westminster system of parliamentary government, while incorporating features unique to the Constitution of Australia.

So in essence, the Queen of England is the sovereign leader.  Thereby making any citizen of Australia a citizen of the England.

Britain has persecuted Assange in that they arrested him on allegations he raped someone in Sweden with the intention of extraditing him to the United States.  The allegations of rape never became charges and were officially dropped in May of this year. So why is Assange still in the Embassy you ask? Because Britain wants to arrest him anyway for missing a bail hearing and taking refuge in the Ecuadorian Embassy.  Julian has been in there for over 5 years. Isn’t that long enough for missing a bail hearing?  A bail hearing that a normal citizen would be fined for and not jailed?  So why is Britain continuing with their siege of the Embassy.

I have two theories that probably go together in the end. First Britain still wants to extradite Assange to the US to supposedly face trial there. However, under the NDAA law passed in 2011 by Barrack Obama, the US can detain him indefinitely without trial.  Britain stands to gain from the extradition because the US is their closest ally.  The US buys a substantial amount of products from the UK.  Also, let’s face it, the United States is considered the most powerful country in the world.

My second theory is that they are sore about the money they have spent to keep the Embassy under seige.  To them, letting Assange go would be likeY a kick in the ass.  You are still asking how does this make him a refugee correct?

The whole reason that Assange was arrested was based on the information published on Wikileaks about Iraq that they obtained from Manning and began publishing them on November 28th, 2010.  Before that, according to wikipedia “in April 2010, WikiLeaks released the so-called Collateral Murder footage from the 12 July 2007 Baghdad airstrike in which Iraqi journalists were among those killed.”

The US government was not happy to say the least. We know that the CIA in particular would want to take Wikileaks out and how better than to first defame Assange as a rapist and then have him arrested on said charges and extradited?  Many supporters believe that the whole thing was a set up to smear Julian and discredit Wikileaks.  I also think they set him up.  How better to get to a man than through sex?

By releasing the documents that they did, Assange became a political prisoner who could not see any way out of the situation he was in. Many in America were screaming not only for a trial but for his death.  In any case, all Julian was truly guilty of was exposing the truth of a corrupt government.

Are you beginning to see the picture here?  Britain was never going to let Mr. Assange go.  They had no intention of sending him to Sweden and he knew that, so he sought political asylum in Ecuador. He could not leave Britain as the government had taken his credentials so he had no choice.  So for 5 years Julian has lived in a box not much bigger than a walk in closet. By seeking asylum from a government who intended on making him pay for telling the truth, he is imprisoned in that Embassy with no other options but to stay.

So ask yourself, is this fair?  Is it humane to keep a man inside a box for 5 years and counting?  Is it right to not let him see his children grow up, to isolate him from the world for doing nothing wrong?  Well, is it?

The UN ruled that Britain was in violation of his human rights and to release him immediately and yet the UK government refused.  To me, this makes every government official guilty of tyranny and is no better than the Nazi regime who imprisoned Jews based on their racial background.  You could compare this treatment to Gitmo and the torture that goes on there.

Can Assange ever be the same man he was? No. That is impossible. He lost his freedom and pays a price higher than most would.  Perhaps, he could’ve stopped publishing the truth but that is not within him.  He is a political refugee and only we can help him.

Petition the British government. Write them scathing letters. Write to the US government as well.  Support Wikileaks and Julian on social media.  Help us educate who do not know of his plight.  Julian is a publisher, and editor, a journalist and a hero.

Please donate to his legal fund at http://www.justice4assange.com 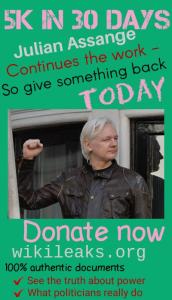