In recent weeks, Freedom of the Press has chosen to end its five-year stint as a surrogate for Wikileaks donations.  According to the Washington Times, (article seen here Washington Times articles ) FPF dropped them because ““FPF’s board unanimously found — upon review of the available evidence — that the financial blockade by the major payment processors is no longer in effect, and as such, we will soon cease processing donations on behalf of WikiLeaks readers,”  Trevor Timm, the foundation’s director, wrote in a Dec. 9 email to WikiLeaks publisher Julian Assange.

But is this the real reason for the sudden unanimous decision by the board to end support? Is it possible that the Freedom of Press Foundation dropped support for Wikileaks due to a strategy outlined in the “Wikileaks Threat” PDF? (Seen here Wikileaks Threat link )  Did an agency of the US use this strategy to turn the board of directors at FPF against it’s Founder?  I have included a copy of part of the strategy used by First of America in 2010  and the following intel agencies ( Palantir Technology, HBGary & Berico Holdings) in hopes of destroying Wikileaks.  As you know, this strategy didn’t work. 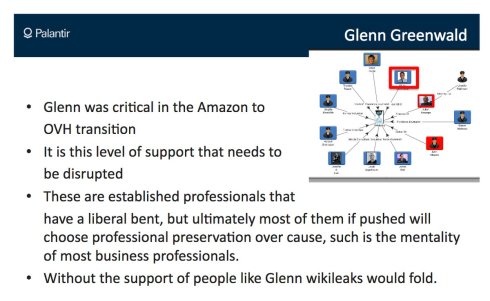 Is it possible that the board voted unanimously because they were pushed and chose professional preservation over their own belief system?   In February of 2017, Wikileaks and Julian Assange began running #Vault7 revealing CIA documents exposing 4th amendment violations of US citizens privacy.  These documents also showed the incompetence of this agency and was an embarrassment to the organization.  Was there response to use this strategy to destroy Wikileaks and put doubts in the minds of moderate supporters?

Did the CIA fuel the fire by pushing the “Russia” narrative on to the left-leaning board members in order to further sabotage their relationship with Assange? Was this all a plan to plant hatred in the minds of both sides? After all, Julian Assange founded the Freedom of the Press Foundation when the bank blockade of Wikileaks took place.  How better to bring down the morale of the staff and the editor himself than to pressure the foundation into dropping their support?

Is the “Russian” witch hunt more than just a plan to impeach Trump but to also put an end to the existence of Wikileaks and its director Julian Assange? Many of the directors were unhappy with the results of the election and the media placing the blame on Wikileaks would further feed the fire.

How better to slander the name of the editor and publisher of #Vault7 then to have his own colleagues defame his name on social media? The CIA would not hesitate to use such a strategy against what they think of as a foe, so why not?

Media already has pushed a disinformation campaign against Wikileaks in the past and continues to spread false facts.  It wouldn’t be hard to push this in the right direction and disenchant those who are on the left to turn on WL.  It is already happening with the average liberal citizen so why not the FPF who are mostly Democrats? The CIA or other agencies could easily identify certain board members as potential turncoats, looking for behavior that would show doubt in Assange. Believing that Wikileaks would fold without the support of the Freedom of the Press Foundation, any smart intel organization would target such individuals with propaganda and pressure.

Will we ever know if this is the case?  Maybe not but then again, a lot of things come to light when we don’t expect them to.