It is not unusual for a journalist in this day and age to stretch the truth to make a story bigger but to out and out lie to keep themselves in the public eye is outrageous. Jerome Corsi seems to make a habit of it and also to lie to cover his own ass. In fact, it appears he is giving false information about Assange to save himself from being indicted by the Mueller Witch Hunt. Claiming to be an honest, integrious man and a Christian. Corsi has time and time again used false information about Julian Assange to make himself look bigger than he truly is.

For instance, in January of 2018, Jerome Corsi hearing rumors because of Julian’s account being deleted on Christmas Night chose to spread the lie further through this tweet seen below. He in no way vetted this to be fact but just furthered the gossip going around. He used an InfoWars article based on the same rumors to try to prove he was right. 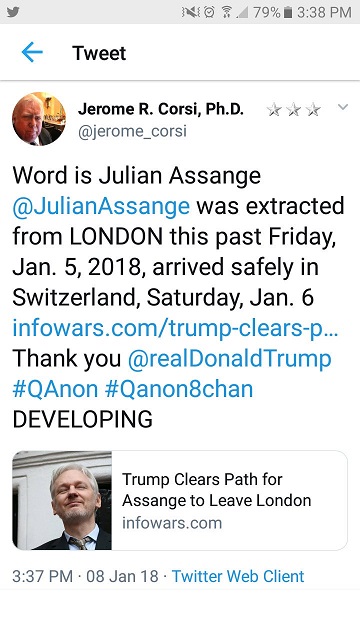 Jerome Corsi has been caught many times in his deceit and dishonest nature. When I myself called him out on his lie about Cassandra Fairbanks and Julian Assange seen below, he immediately blocked my account rather than replying to me. 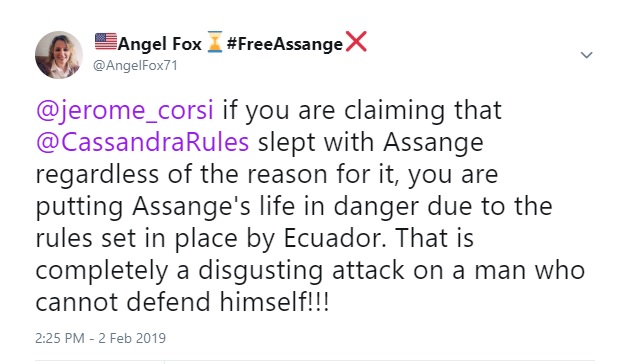 There is much truth to this. Currently, Assange is unable to defend himself due to unfair Ecuadorian regulations put on his asylum. He cannot speak about anything political and is not online at this point. Also, by spreading this lie on MSM he has put Assange’s life in more danger than it is already in.

Corsi claimed to have prior knowledge of the Podesta emails through Roger Stone who it has been proven had no such knowledge. In the end, he retracts and says he believes Stone had this information and said the following:

Jerome Corsi on CNN: “I believed, I figured out that Assange had Podesta’s emails … and it turned out that I was right”

Once again, he is not only covering his ass but turning on his own. See below statement:

I believe Corsi knows he will be indicted and is directly trying to sabotage Assange for brownie points. Stone had no contact with Assange and was refused a visit when trying to visit the Embassy.

It is hardly surprising that Corsi and Stone stated prior to October 6th, 2016 that they believed Assange had more to dump as Assange himself stated in this interview on July 29th, 2016:

After I myself watched this interview, I could have predicted what was to come. I am certainly not psychic but it was obvious Assange and Wikileaks intended to drop more data.

The funny part of the Mueller investigation is this. The only thing they have on Wikileaks is that they simply published the DNC emails and the Podesta emails and cannot in all actuality prove anything else. Wikileaks did a service to the community by exposing the criminal behavior of both the DNC and the Clinton Foundation, nothing else. They did their jobs as real journalists and honest media organization. No one has questioned the authenticity of these documents or any other document published by Wikileaks in the past or present.

In fact, everyone knows the US wants to extradite Assange. What fruit does it bare to prove that no one in the Trump administration or any journalist had prior knowledge of this Mr. Mueller? All it will do is further prove you are on a witch hunt.

And as for Jerome Corsi, please continue to lie and make accusations it only validates those of who know you are lying. But remember Mr. Corsi one day you will stand before the Judge who knows all and the truth will come to light and all those hidden will be revealed.