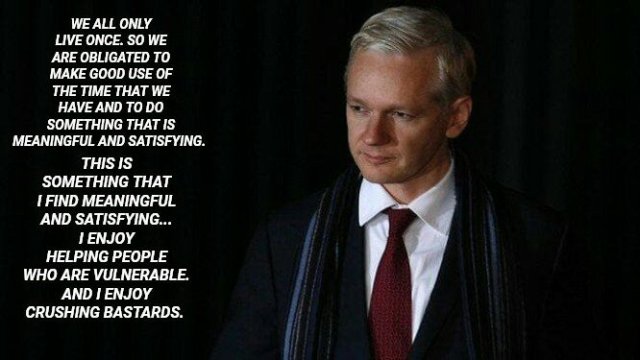 In a time of great corruption and lack of morals and ethics, our governments have become evil vessels of destruction and human rights violations. When they commit a crime against humanity, the environment or any other ferocious act, they call it “classified” so that the general public will not know of their hidden agendas. Wikileaks was created to publish these concealed secrets. It was designed to help the public hold their governments, politicians, and corporations accountable.

In order to do this and not destroy their sources, Assange created a Dropbox. This was to protect the identity of the whistleblowers bringing documents to expose injustices. Without this protection, whistleblowers often face life in prison.

Assange and Wikileaks are necessary not only for the protection of whistleblowers but to publish documentation of government transgressions. If they manage to destroy Wikileaks and permanently silence Assange, freedom will be lost.

By prosecuting Assange, they are literally taking away our right to hold them accountable. They are destroying free speech and press freedom. Without Assange, our voices will become silence as well. He is the voice of the innocent who are tortured and murdered. He is the voice of the people unable to cry out in agony over what crimes are committed. He is our voice. We are Julian Assange!

He has been tortured, persecuted and illegally incarcerated for truth and justice. When our governments failed to stand by it’s own laws, Assange stood up and revealed those illegal acts against the people. Now, he may be silenced forever and lose his life because he gave a damn. He did what no one else was willing to do! He showed us the truth and now they seek vengeance on him. The most powerful country in the world right now is afraid of one man and his organization. Why? Because accountability is no longer in their vocabulary.

The media continues to spread it’s lies and propaganda without any remorse or guilt, while the real journalist awaits extradition and possible death. The real criminals walk free and cry out for his head while the man who exposed them deteriorates mentally and physically in prison. He has been denied access to data that will help him in his defense and visits from his lawyers are few and far between. They are crucifying him one day at a time.

The evil being done to Julian Assange must be compensated. He must be given freedom before they turn him into a modern day martyr for truth. We must make them release him. We cannot delay. We have to be his voice as they have taken his away. We must save his life in order to save ours. Assange stands for freedom. His freedom is ours. His imprisonment is ours as well.

Stand and fight for justice, truth and your rights! Fight for Assange!