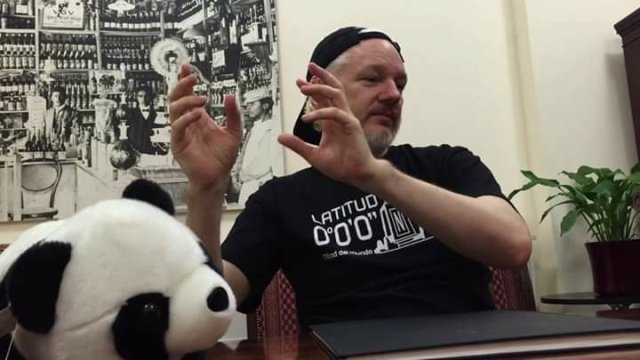 With all the hatred directed towards me, all the blatant lies, anyone else would have stopped campaigning to #FreeAssange.
But this is not about me. This is about the man who brought us the truth, risked his life to expose injustice and is now paying the ultimate price. From the beginning, it was never about me.

Yes, I’ve made some sacrifices to help him. Mostly my time and my heart, but all the things I’ve done are nothing compared to what he has done for us.

There is so much hatred on social media today it is mind blowing and so much directed at Assange. As good a person as Assange is, I do not know how he could handle that which was directed at him. For myself, I have often had to remind myself why I started supporting him to begin with.

I chose this road for many reasons when I look back. I wanted to make a difference and when I read about Assange’s plight, the mobbing and the torture, it made my soul scream. The more I read and learned, the more I knew I had to do something. So I started writing again and making memes which led to 3 DC vigils in front of the White House, mostly out of my pocket. Then I went to London for 21 days to watch over the embassy. Still I am planning another DC vigil in the cold on February 24th.

I didn’t want attention or fame. I wanted to set an example for others to follow. I wanted people to know the truth about what the U.K., the U.S. and Sweden were doing. In the end, I added Australia and Ecuador to that list.

If my doing what I do brought more people to help and taught them the truth and helped others free him,then I had done what I set out to do. Regardless of the consequences and hatred I have endured. I know others have been hurt by it as well. I know some of ended up dropping their support. I wonder if those people realize they only hurt Julian by attacking others?

Along the way many hated me for doing the above. It seems they viewed my support as some sort of crime. More Assange supporters believed incredulous lies being told about me. I can’t say I always have stood strong against the accusations of operative, troll, stalker, fake. Many times I bawled and thought about quitting. I made a few huge mistakes along the way. After all, I am human.

I am an empath and a sensitive person. I have a huge heart that breaks easily. The last 3 years I have been under constant, unending attacks by key supporters. For what? Doing what I can to help.

When I think about quitting I remind myself what he is going through. If together we can free him regardless of the hatred towards me, the end goal is worth my broken heart. For truly, his heart must be broken. He is suffering as an innocent man. He must often feel as Jesus did. Betrayed, persecuted and tortured for loving people enough to tell them the truth.

How it must break his heart to know so many want him dead, how many sit complacently while they martyr him. He’s dying inside those prison walls. Not just from the torture, but I believe from a broken heart.

My tears are a small price to pay to see him free. The hatred and mobbing of my character mean little compared to the sacrifice Julian is making.

So go ahead and hate me for fighting so hard. It doesn’t matter, it’s not about me. It’s about freeing my hero, Julian Assange.