A tweet from Chris Lonsdale, shown below, contains a response to a letter he wrote to Buckingham Palace concerning the extradition of Julian Assange to the U.S.  In the response, a spokesperson stated that the case was political. 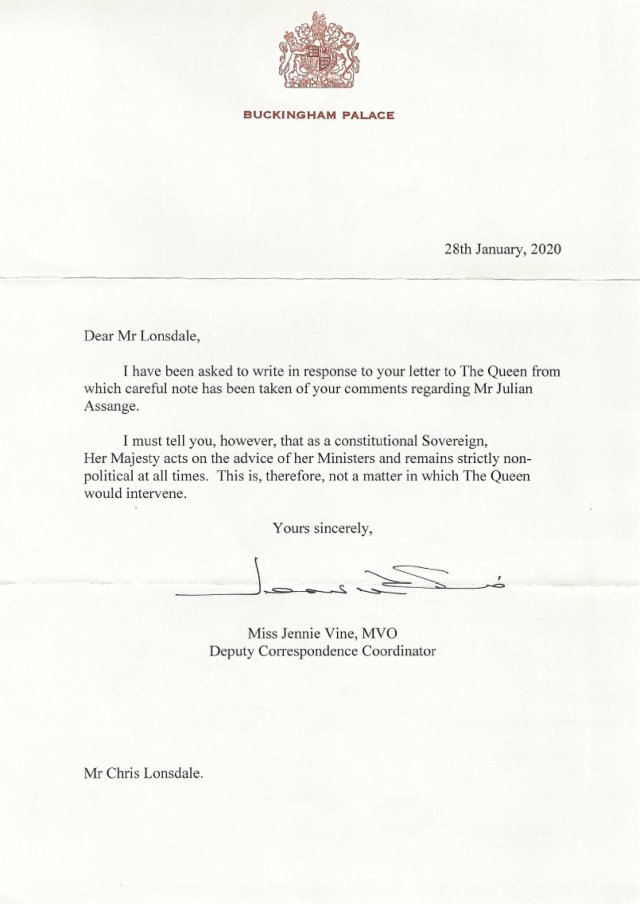 A lot of people are upset by the statement above which reads specifically:

“I must tell you, however, that as a Constitutional Sovereign, Her majesty acts on the advice of her Ministers and remains strictly non-political at all times. This is, therefore, a matter which the Queen cannot intervene.”

This statement actually may backfire.  You see, according to the Extradition Treaty between the U.S. and U.K.  According to an article by justsecurity.org:

“Another defense available to Assange—and perhaps his most formidable one—will be to assert that he is being charged with a political offense. If that assertion is deemed correct, it could block his extradition, because, like many extradition agreements, the US-UK treaty forbids any transfer based on such charges. The categorical prohibition under Article 4 of the treaty could not be clearer: “Extradition shall not be granted if the offense for which extradition is requested is a political offense.”

But what is a political offense? Transgressions such as espionage, sedition, and treason are what are known as “pure” political offenses, including underUK law—that is to say, activities that directly target the state but that would not necessarily be criminal in other contexts. A related category, known as “relative” political offenses, covers common crimes that are incidental to purely political activities. Because various jurisdictions have interpreted the expansiveness of this political exception differently over time, a universal definition of a relative political offense is difficult to articulate, but the basic principle of the political exception in extradition has remained unchanged since its origins in the late nineteenth century. It states, in brief, that nations should not return political opponents to face prosecution for challenging the states that would sit in judgement of them.”

The Queen’s statement just made Assange’s extradition illegal according to their extradition treaty.  Technically, he cannot be sent to the United States.  Keep in mind, the U.S. is refusing to extradite a woman accused of killing Harry Dunn on diplomatic issues, claiming she is a diplomat’s wife when in fact she is CIA.  The U.K. could easily back out of this case by using its own treaty to justify saving Assange.

The only question that remains then is will the British judicial system abide by its own laws?

3 thoughts on “Buckingham Palace Has Called Assange’s Case Political: Why That Matters”